The passion behind our story

Lighthouse School Leeds has been eight years in the making. It was born from the specialist needs of our children and others like them as they progressed through the education system.

“We first began exploring the Robert Arthington building’s potential about three years ago, when it was just a derelict shell, and we immediately knew it could become a wonderful home for the school. We were very fortunate to be guided through the whole construction process by a hugely experienced development team which has enabled us to translate our initial vision into a superb school that is specifically designed to suit our individual requirements.”
Katie Parlett, chair of Trustees and Governors at Lighthouse School

Our goal was to create a beacon school that would not only support families with autistic children across West Yorkshire but also build strong ties with the local community and Leeds City Council children’s services to complement existing provision.

As a team we have made full use of our shared extensive knowledge and experience in the fields of education, finance, business and management, construction and development to create this school. Over the years we looked at many different options, but the introduction of free schools by the Government gave us the opportunity we needed to make our dream a reality.

After delivering our proposal to the Department of Education we were invited to the next stage of the process, an in-depth interview at Westminster before a panel of eight education experts and government advisors. That was followed up with the submission of a financial plan including full budgets and benchmarked costs.

“This building had sat empty for many years so it was in really bad condition, which made it a challenging project from an engineering perspective. However, it immediately became apparent that we were creating something very special which reinforced the decision to restore the existing building because it offers so much character and an endless range of features that all contribute to what the school offers its students.”
Richard Parker, a Director at Adept Civil and Structural Consulting Engineers

When word finally came through that Lighthouse School Leeds could go ahead we were overjoyed. Finally we were on our way to building a school which the whole community can be proud of.

“Every aspect of this school was designed with its students in mind and we invited teachers to contribute to key rooms such as the science, well-being and food technology departments to ensure they are highly functional throughout.”
Mark Henderson, a director at Brewster Bye Architects

In 1886, John North gifted £6,000 to open a convalescent home in memory of his daughter Ida. Chorley and Connon of Leeds were the architects (they were responsible for building some of the most iconic buildings in Leeds including the Hotel Metropole). The hospital opened on 10th May 1888.

Robert Arthington of Leeds financed a second hospital - known as “the ‘Robert Arthington’ semi-convalescent hospital” - on the adjacent site. The new hospital was opened by the Lord Mayor of Leeds on 18th May 1905.

In the later years of the nineteenth century an odd, gloomy figure was to be seen from time to time in Headingley village, buying a few necessities of life, dressed in old clothes green with age and an ancient stovepipe hat passed down from his father. This was Robert Arthington, often called ‘the Headingley miser’, the subject of much talk and speculation in his lifetime and legendary after his death for his legacies of over a million pounds.

Cookridge Convalescent Hospital provided a place for patients who had been treated at Leeds General Infirmary to continue their recovery. Patients paid for their own care if they could afford it but there were free places available as a result of donations from benefactors – three weeks convalescence cost around 8 shillings a week. 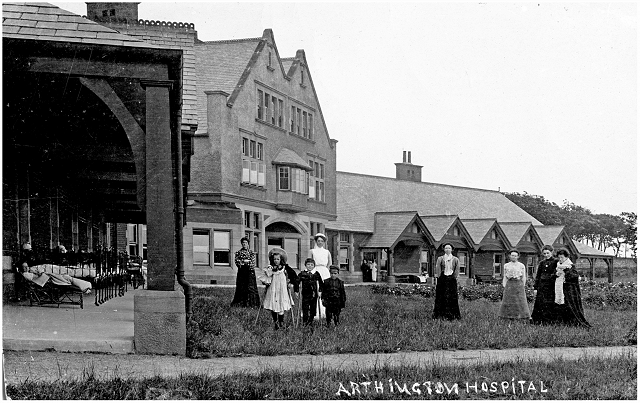 Over the years the convalescent hospital was gradually extended, and during the First World War the building was requisitioned to care for wounded servicemen, resuming its civilian role after 1919. In 1939 when it was again taken over by the Government and briefly housed the Leeds Maternity Hospital.

The story of Cookridge Hospital as a cancer treatment centre began in 1952 when it was acquired by the Leeds Regional Hospital Board. The hospital was developed as a Regional Radiotherapy Centre using the latest technology. This required considerable adaptation of the original convalescent hospital plus a number of new buildings which were constructed on the site in the 1950s and 1960s.

The NHS After the creation of the NHS in 1948, the relatively remote location of Cookridge was an advantage when the site was chosen to house an advanced radiocobalt unit which could utilise radiotherapy to treat cancer patients. After the terror of aerial bombing in World War Two, there were concerns that the nuclear material needed in this fast-developing science which required heavily shielded rooms to keep people safe from radiation, would be a risk to the local population should the country once again come under air attack. Basing the facility in an area of low population density was therefore a priority.

With the creation of the NHS, voluntary and municipal hospitals were to be transferred to state ownership and administered by Regional Hospital Boards. Thus, the Leeds General Infirmary became part of the United Leeds Teaching Hospitals NHS Trust, with the Women’s Hospital, the Leeds Maternity Hospital, the Dental Hospital and the Ida and Robert Arthington Hospital.

But by the 1990’s the buildings at Cookridge had become old and unsuitable and its remote location meant that it was too distant from other specialities and equipment that cancer patients needed. The Hospital closed in 2008 when patient services were transferred to the brand new Bexley Wing facility at St James’s Hospital in Leeds.